If you notice spam, irrelevant or unsolicited advertisement posts please alert us by clicking the "Report" or the "Contact us" link below. Posts violating Forum Posting Policy will be removed.

Cultivation of grapevine in tropical area, like in Indonesia, posses several problem. With high rainfall and high humidity, and without cold period to overwinter pathogen, disease always present all year round. One of the diseases here is grapevine leaf rust, caused by specific fungus that attack grapevine leaf. 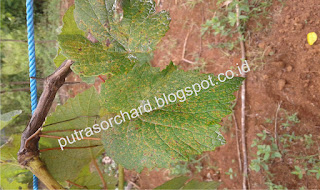 Grapevine leaf rust usually occurred on monsoon season, with period of high rainfall and warm temperature, can cause this disease to grow and thrive on grapevine leaf. Especially on vineyard, that using too close planting space between vine. 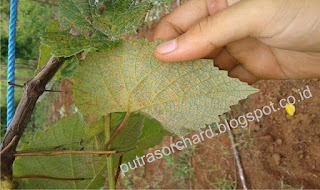 From many sources, this disease, caused by fungus Physopella ampelopsidis(Diet. Et. P. Syd.), others name is Physopella vitis (Thum.). (Semangun,1989).

Control of this disease are with, removal of infected leaves, that marked with yellow or brown spots, and using chemical methods, fungicides spraying.

On my experiences, sprayed with contact fungicide, like Dithane M-45 with active ingredient of mancozeb, with dosage of 2-3 grams per liter of water, have good control efficacy.

Another contact fungicides like Daconil can also be used, with active ingredient of chlorothalonil, with a dosages of 1-2 gram per liter water mixture, also effective in controlling of this disease.

Routine spray with contact fungicide is a must, at least once a week, because this diseases usually occur on monsoon or rainy seasons, where high rainfall can wash fungicides coat away from grapevine leaves. Adding surfactant and sticker also helpful on monsoon seasons. 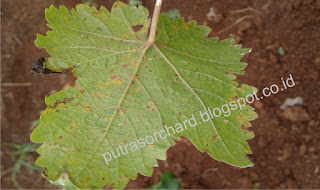 Systemic fungicides like AmistarTop with active ingredients of Azoxystrobin and Difenoconazole, with dosage of 1ml per liter, are the most effective means of chemical control this disease, because this fungicide is systemic, it’s mean, that plant will absorb it, so it will have long lasting control and efficacy compared to others contact fungicides. Also systemic fungicides, will not easily wash away by rain like other leaf coated contact fungicides.

But the usage of this kind of fungicides, need to be rotated with another fungicides, to minimize the risk of pathogen resistance against fungicides.

Also, at monsoon or rainy seasons, vineyard must be clean, especially on soil beneath grapevine, weeds need to be removed, prior to rainy seasons, any other grapevine debris must also be removed and burned to prevent spreading of diseases.

Fertilizing grapevine with fertilizer that contain potassium will reduce the incidence of infection of this grapevine leaf rust disease.