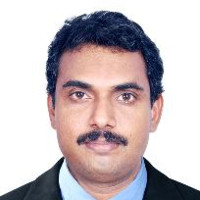 Dr. Dinesh Kaippilly is officiating as the Head of the Department of  Aquaculture, Kerala University of Fisheries and Ocean Studies (KUFOS) in Cochin, Kerala  which is the first State Fisheries University of India. He was conferred as a FELLOW of World Aquaculture Society (which is a global organization headquartered in the USA) encompassing the scientific and business fraternities. He is the second Indian to receive this award after (late) Prof. (Dr.) M.C. Nandeesha from Karnataka. Dr.Dinesh has a professional experience of more than 20 years in fisheries, aquaculture and allied areas in various institutions including teaching experience of more than 18 years in College of Fisheries and KUFOS. He was the Head of Fisheries Station, Puduveypu under KUFOS for more about 6 years where he had carried out the first Penaeus vannamei farm and hatchery with the support of Government of Kerala which attracted the attention of the public and scientific fraternity. He has played a pivotal role in popularizing Vannamei shrimp culture in Kerala by training hundreds of shrimp farmers all over the State. He has also propagated the concept of organic shrimp culture by giving lectures on the topic in many places including foreign countries. At present he is the Principal Investigator of an organic shrimp culture project funded by COOP, Switzerland. Dr. Dinesh was the team leader of two Fisheries Consultancy Mission/DPR preparation abroad and has been approached by Government of Union Territory of Lacdeves for preparing the Master Plan for Aquaculture.